Where food goes to die (A Work in Progress)

In case you missed it, the grey lady of American business journalism
recently ran a piece about how consumers were starting to shop at
grocery surplus stores not because they had to, but because they had
discovered bargains on some of their favorite high end foods. Yogurt.
Goat cheese. Ben & Jerry’s ice cream.

As the article explained, there’s nothing wrong with the food, really.
Instead, grocery chains sell to these places (which my friends and I
call Smashed Foods) because the food is nearing expiration date, was
part of a completed promotional sale or because it never caught on with
consumers. Like Ben & Jerry’s Black & Tan ale-flavored ice cream. While
it may have seemed like a good idea at the time, the company’s
customers begged to differ.

Thanks to this nothing of a story, I now find myself engaged in
hand-to-hand combat just to get bargains that used to be there for the
picking. Where once I could run in and buy six Caribou Coffee bars for
$1 or 8 small yogurts for 99 cents because regular shoppers just
weren’t interested, I now must battle with soccer moms pushing carts
filled with kids and wine-laden yuppies. And that’s just wrong.

Notorious cheapskate that I am, this used to be my retail therapy.
Instead of running up credit card bills buying stuff I didn’t need, I’d
come here to buy foodstuffs that were more must-try than must-have. And
with prices only $1 or $2 per item, it was easy to get away cheap. I’ve
had Tin Roof Sundae Ice Cream (99 cents a pint), Thai Basil stirfry
sauce (79 cents) and Rolo Ice Cream bars (25 cents).

In an effort to get back at that business rag…um…fishwrap…er…newspaper,
I’d like to remind WSJ readers that Smashed Foods is also the place
where food goes to die. It’s the last place on food’s food chain before
it finds its way to the landfill. Oh, sure, even now you can find the
occasional log of goat cheese or box of Carr’s Water Crackers, but
you’ll also see at least three or four items like the following
disturbing comestibles:

APPLE ZAPS CEREAL –There’s nothing quite like irradiated cereal.

COCOA BLASTS – Another cereal. Blasts and Zaps, apparently the cereal
aisle is a violent place.

COFFEEMATE AMARETTO CREAMERS 10/$1. Aren’t these the same creamers that
you get in restaurants for free? 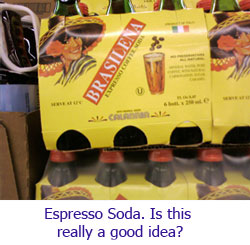 ESSN SPARKLING FRUIT JUICE -- It comes in apple, cranberry and
tangerine flavors, it’s juice and it’s unnaturally fizzy. You call it
sparkling, I call it spoiled. Maybe that’s why the brand name is essn,
not getrank.

FRUIT LOOPS SMOOTHIE – Just what we’ve been looking for: A
fruit-flavored drink with all the sugar of breakfast cereal and none of
the health benefits of actual fruit.

ONE-STEP TUNA SALAD MAKER – Mayonnaise with the addition of a few
spices and 25 more cents.

SOUTH BEACH LIVING CHICKEN WRAP SANDWICH KIT – The perfect kit for
people who aren’t really sure if they’re lazy or not. We’ll give you
all of the ingredients, but you’ll still have to put it together
yourself. Even the makers don’t seem to know what it is. Is it a
sandwich or is it a wrap? Or is it (GASP) a sauceless burrito? 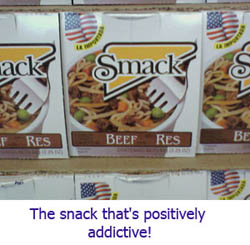 SMACK RAMEN – Does that mean it’s heroin-flavored ramen? I was afraid
to try it, but I hear the taste is mighty addictive.

And then there’s my personal favorite….

POTATO AND CHEESE PIEROGIES – I’ve had them and they are mighty tasty,
but I don’t know many people who want to buy food made by a company
named CHEEMO.

From a man who’s not sure if he’s still wants the rest of his meal,

DAVID H(ungry? No thanks, I think I’ll pass) Volk